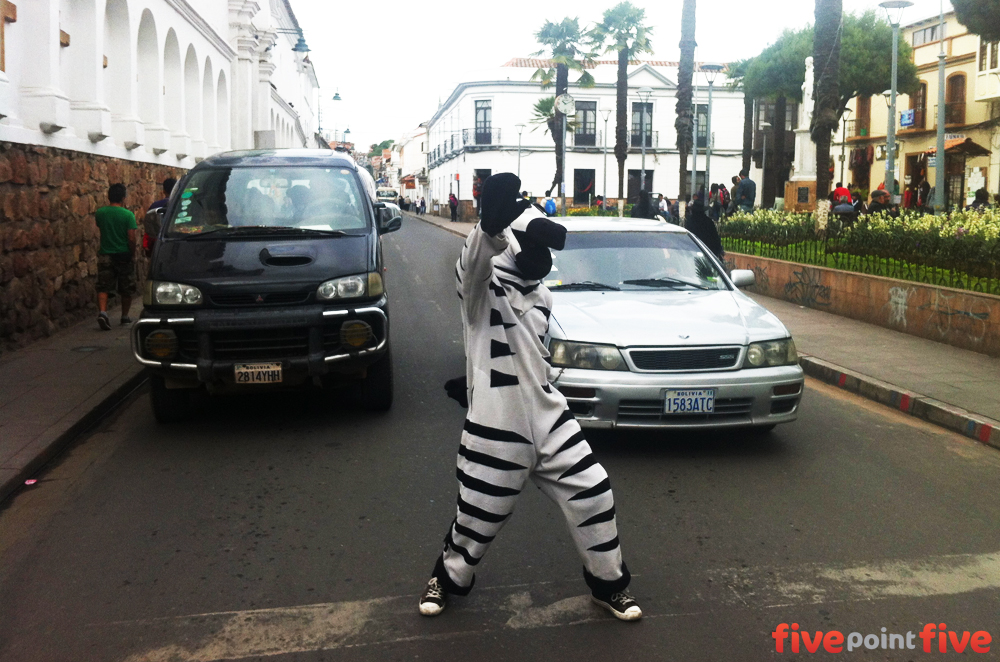 When you read and see stories coming from the Wall Street Journal (WSJ) about Bolivia being the New Afghanistan, you start to wonder. Are the Islamic Extremists really here? Is the country being run by a completely corrupt government? Is Bolivia SAFE? Is Bolivia a place you can visit, given the kind of language being used in this report in the WSJ?

I want to analyse this 5 minute report. I will do so using logically analysis of the statements made by the reporter and the news anchor. I will also refer to my own experience here in Bolivia over the past 5 weeks. I will break each sentence down line by line and try to discern what is really being said and why?

Each point will begin with the words as said by either the anchor or the reporter. I will analyse the words in the paragraphs afterwards.

The reporter in question is called Mary O’ Grady and for those of you who would like to watch the video first you can see it here. She has also written an equally sensationalist piece mirroring these sentiments in the video. You can read that here, but you need to subscribe first.

The anchorman pre texts the conversation by referring to the report to follow, as “disturbing”. Using emotional language like this helps to condition the viewer to expect what follows to be something which is bad, upsetting and out of the ordinary. It is a subjective opinion which has no relevance in fact.

The first comparisons between Bolivia and Afghanistan is that they are both “Poor and Land Locked” countries. This might be the most accurate statement the reporter makes. What she establishes here is a geographical and physical entity in the viewers mind. I will attest to the fact the Bolivia is indeed, poor and land locked. Comparing two countries based on physical appearance has ABSOLUTELY NO RELEVANCE to her report, apart from making the viewer believe that everything this reporter might say is fact

The reporter then proceeds to attack the President of Bolivia. She ALLEGES he has connections to the drug trade in Bolivia. She SPECULATES that he allows the drug cartels to work away with no harassment from authorities. She BELIEVES that this is why he is such a popular president and was elected. You will notice that here the reporter resorts to idle conjecture – in other words, she makes loose statements which are not based up facts. She offers an OPINION, which follows on from her previous point about the two countries being land locked (which was a fact)

Here is where the interview gets really interesting. The anchorman refers to Bolivian culture as being akin to “Pre 9/11 Lawless Culture” in Afghanistan. You need to understand what is happening here. The WSJ are planting the idea in the head of EVERY American who watches this video, that Bolivia is a dangerous and evil country. Think about it. Pre 9/11 and lawless evokes a memory so engrained in the group American psyche, that mentioning it so casually, instantly brings to mind the imagery of the World Trade Centre Towers collapsing.

They are planting ideas that the cultures here in Bolivia is harbouring a sentiment that could MAKE SOMETHING LIKE 9/11 HAPPEN AGAIN. This is pre emptive psychological conditioning at a mass scale. The idea being purported here is that if the USA government does not take action, then evil and bad things may happen again.

Let me clarify my experience of Bolivia for the past 5 weeks. It is a beautiful and peaceful country. The people are friendly. The streets are friendly. In all the major cities there are police visible and there is certainly no fear factor when you walk around. Sure you avoid some places, but that is the same in every country. Calling this culture “lawless” is the most blatant sensationalism I have read in a long time.

5. Relationship with Iran – allowing them to send fundamentalists

The interview moves on. We are brought to the crux of the issue – Iran. Bolivia has been seen to have an open relationship with Iran. As the US government has issues with Iran, it follows to have issues with friends of Iran. The reporter again ALLEGES that this relationship between the two countries means they are sending in extreme fundamentalists to Bolivia.

The idea being grown here is that Bolivia is currying favour with Iran and allowing agents to train and recruit in their country. Again we have to look at ANY facts the reporter uses. The first fact is that Bolivia and Afghanistan have similar geography. The only other fact she tells is that Bolivia and Iran have a working relationship.

EVERYTHING else she says is idle speculation – Nothing more and nothing else. She leaps from idea to idea as though she were stating fact after fact. The reality is that the opinion she proffers, merits drawing scant logical conclusions

6. In cohorts with Venezuela – all countries who are, must be Anti American and not safe

Let us bear in mind that the title of this piece is “Is Bolivia the new Afghanistan?” Here, the interview touches on the fact that Bolivia is friendly with Venezuela, a country known to speak out against American foreign policy. The reporter is blanketing all countries who do not agree with the US government as unsafe. The subtext here is that of “if we do nothing then another great tragedy could occur upon the American people”. The logical conclusion of what the reporter is saying is that some pre emptive strikes may be necessary to bring Bolivia into line.

What the reporter fails again to do is provide us with any fact at all. She merely speculates as to the “friendliness” of two countries and infers from this, that this is a dangerous situation for Americans. It is flimsy logic and has no bearing in a reality which calls for facts to be spoken and not idle speculation

The reporter then goes on to say that human “intel” is important. I would love to hear or see anything which is more than her talking about how important this kind of “intel” is. She makes no reference to actual “intel” she receives. Such reporting means we are to rely on her “word” over facts.

8. Who are the terrorists? Answer – the most high profile one is Iran

We get to the core of the issue here – Iran. The host asks the reporter who are the specific “Terrorist” threats. Notice how we move from speculation, to the idea that there are “Terrorists” in existence in Bolivia. There are ZERO factual statements to back up any of these conclusions.

Now, you must bear in mind that one is meant to follow their logical arguments. One is meant to actually LISTEN to what they are saying, without reacting to the sensationalism they use. So remember than when the host asked SPECIFICALLY who are the terrorists hiding out in Bolivia, the reporter answered by stating the country of Iran.

A country. The reporter named a complete country as being the SPECIFIC “Terrorists”. If that doesn’t strike you as strange, then maybe you should think again.

This is important because you can see how tenuous her logic and her story are. At this stage of the 5 minute interview, she has brought in “Terrorism” and Iran is behind it. But, once again, there are NIL facts to support any of the statements she makes. And there is just no reason for her to call the WHOLE country of Iran a “Terrorist” living in Bolivia.

9. The DEA and USAID have been kicked out so it is difficult to collect info

Here is where we get some idea of why her information is so subjective and speculative – She has nothing to go on. The traditional methods of garnering information in Bolivia have been ejected by the authorities. This means that while her ideas could have had some relevance if backed by facts, she has no FACTS.

10. More Somalis on the street of Santa Cruz

Again the reporter jumps to speculate and name drops the Somalian’s. This is vague, unsubstantiated and means nothing. The idea is that people picture Somalian pirates in their heads and feel that fear. Pirates mean trouble. Best be careful. Best do something about it. But what is one to do?

11. Is this an argument for more security on borders as the Iranian’s can get into US and Canada via Latin American countries – they get refugee status and then into the USA

The host then drip feeds the question to the reporter – does this mean we need more security on our borders? Yes, yes and more yes. More security please. More security to protect the citizens of safe and lawful USA from the lawless terrorists in Bolivia. The reporter alleges she has heard of officials fast tracking documents to help Iranians.

But the only solution is more and more security. There is not enough already. This is how the security meme stays in vogue. We need security to protect from radical Islamic “Terrorists” being harboured in rogue states like Bolivia.
But providing a solution to problems which are based on NOTHING MORE THAN a rambling reporters opinion, seems to me a waste of time and resources.

12. And so is this an argument for more intelligence too?

The final question leaves us in no doubt as to what is needed. While security may provide some modicum of safety, the only real solution prior to pre emptive strikes, is more intelligence. What that means is that the NSA and the global spying network are, contrary to worldwide opinion, extremely necessary. This is the coding of this question and answer.

What she did not say was – “Bolivia is harbouring Iranian terrorists whom we know little about. But the NSA can get their details and keep us safe.” But this is what is implied and meant. There is little doubt as to who paid her for her report.

What I hope you can see here is the agendas which are at work in any news report. This reporter provides the viewer with only two clear facts in 5 minutes of interview. Both have no relevance to the story which she and the host are selling.
The story they are selling is that Iranian Terrorists are everywhere and if we don’t get more NSA and TSA then we will have another 9/11 on our hands. Bolivia is a mere vehicle for the agenda to be played out in. They are selling us fear and loathing in South America.

This is as good an example of sensationalised journalism as you will find.

Let me explain to you that Bolivia is a really peaceful and safe country. I am writing this in a cute café, listening to jazz and drinking a frappacino. I have travelled here for 5 weeks and have had nothing but good experiences. The WIFI is a little patchy at times, but that sounds like a first world problem now doesn’t it?

Whatever happened to live and let live. The US government and their patsies at the Wall Street Journal do not need to stick their heads in here. They need to stay at home and turn off the propaganda machine. For this is the kind of propaganda which begins the attack on a country.
Leave Bolivia alone.

9 thoughts on “Bolivia – Should you be afraid of the new Afghanistan?”