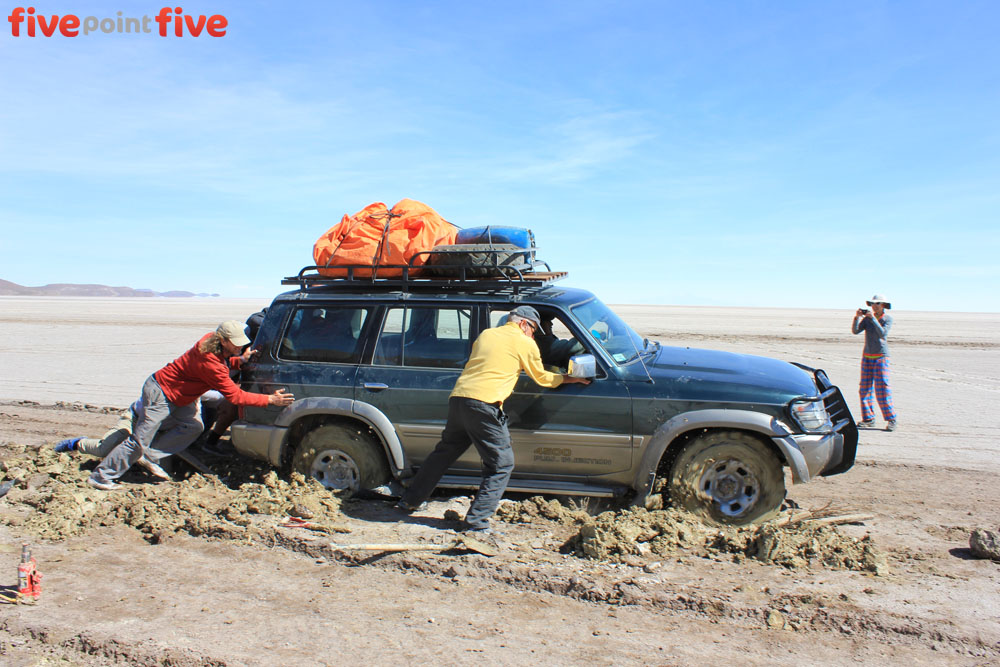 When you travel in remote places car trouble can have a whole new meaning!

1. Stuck in the mud – in the Desert in Bolivia

We booked a 3 day tour of Salar de Uyuni – the salt flats and deserts that join Bolivia, Argentina and Chile.

The first day was incredible despite my altitude headache. It is a truly unique and stunning place and there are no roads! It is all flat and desolate – you just drive anywhere on the salt and sand.

We left on day two for a whole day of driving and sights. Then after 60 minutes full tilt through the salt and desert, we saw another 4×4 stuck in the mud with its inhabitants waving desperately.

We pulled over where we were and walked over to see their front wheels deep in thick, heavy mud.

We were out of mobile range and it was lucky we were behind them as there may not have been another vehicle pass through this part of the desert for hours… maybe a day or two.

The car was sooo stuck. Initially their driver tried not to get too dirty, but after an hour he was coated in mud. There were 14 of us looking for solutions in the middle of nowhere… in the desert… a days drive from electricity, supplies or a rescue car for these people. 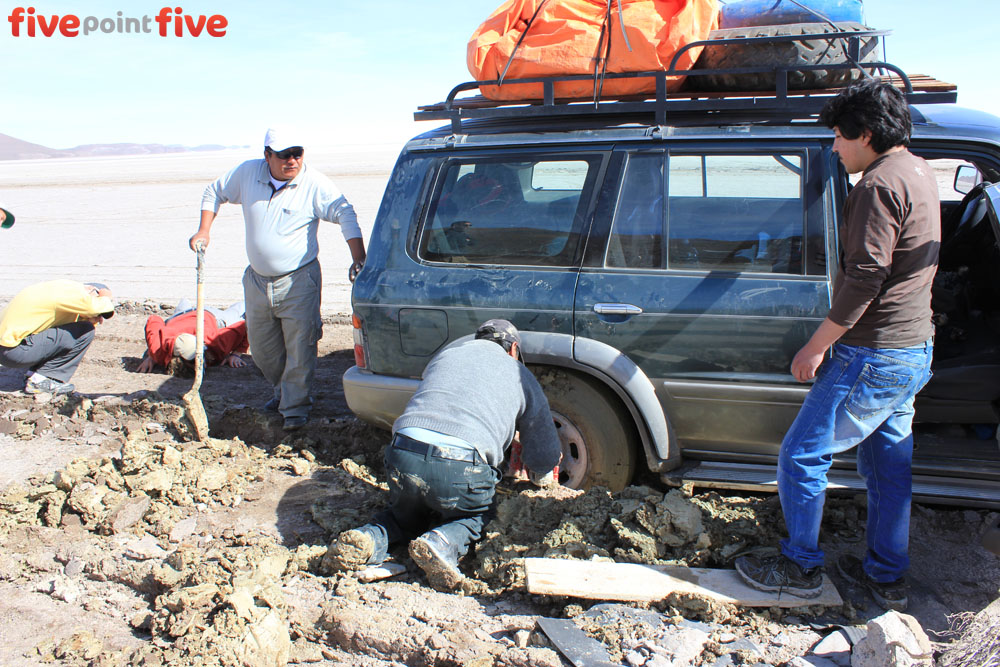 If you looked to the small mountains in the horizon they looked like they were floating. It was the first time I have seen this kind of desert illusion and it was incredibly beautiful – except that being stranded in a place that resembled an acid trip is not a very comforting experience!

A few guys took a tarpaulin and hauled back rocks from a small hill nearby. Others looked for debris that had floated through the desert. It was all hands on deck in the burning high altitude desert sun. 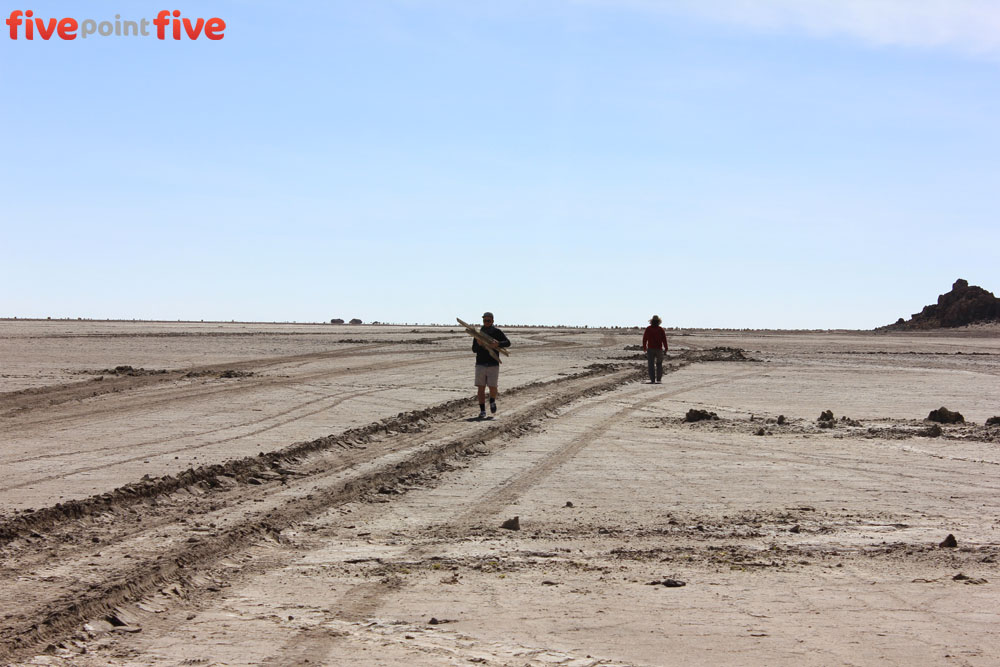 It was suggested that we tow the vehicle out with our one, but the only thing worse than one vehicle stuck in the desert was two.

After hours of trying, our driver drove off to get help. They drove to mobile range, made some calls and then brought back two wooden planks they found in a tiny village nearby.

Another hour passed and the planks didn’t cut it, as soon as the car got out it would get stuck again two metres later. Our driver once again disappeared over the horizon and 40 minutes later came back with the calvary… 6 tiny local women.

We could hear their laughter before the truck arrived with them bouncing in the back with several large planks of wood.

They jumped off their truck and lugged the enormous planks down to the car. 30 minutes later, we all cheered, they took their wood and drove off laughing into the desert.

Now that’s how to get a car out of the mud!

2. No keys – in the frozen Peruvian Highlands 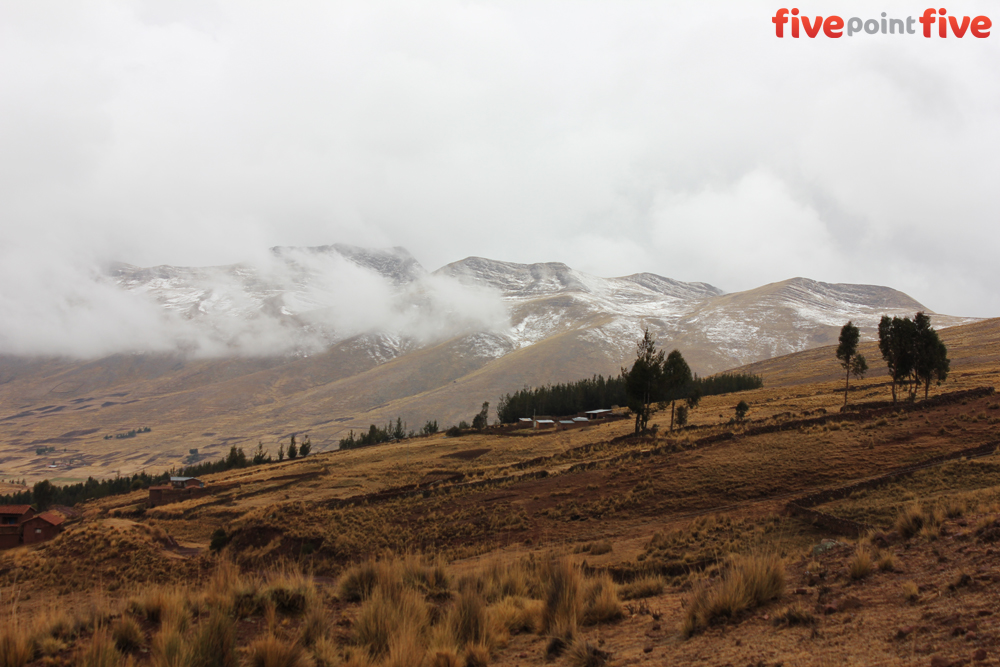 We visited an amazing project in the Peruvian highlands, about 4 hours drive from the city. We were very unprepared for the unexpected snow but we kept warm with the awesomeness of the Cusco World Vision Team.

We buzzed around filming permaculture projects that were successfully improving the lives of people in tiny remote villages 4000 metres above sea level.

At the end of the last one, we sauntered back to our vehicle and realised that the keys were on the inside and we, our driver and hosts were on the outside.

It was freezing and we were literally in the middle of nowhere. The beautiful, grey, misty, snowy valleys of nowhere.

Our hosts called ahead to the other WV truck that was in the vicinity but cell range was hard to get. So the boys got to work on breaking into the vehicle.

Eventually we got a message to the other vehicle who came back for us and there were now 6 guys working on the car. Feeling really happy to be female I left the men to save the day and jumped into the open vehicle and got warm, snacked and gossiped in my broken Spanish while they worked it out. 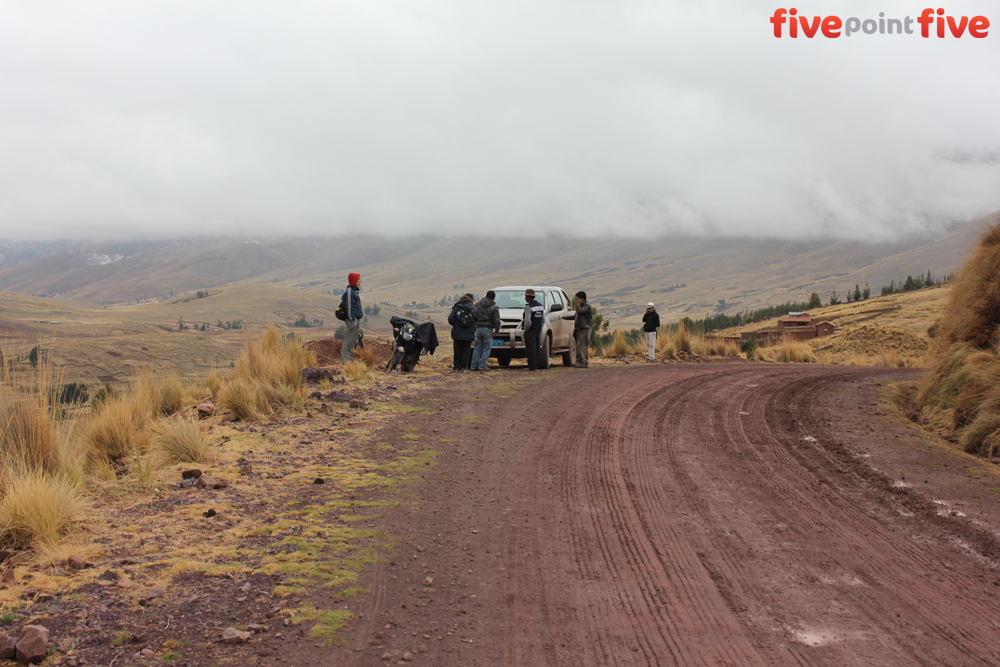 30 minutes later with plenty of team work, a coat hanger and some duck tape we were in, the heat was on and we were able to begin our long drive home.

3. Stuck in the mud (again) in flooded South Australia

We managed to catch the worst flood that the captain had seen in his 12 years on the ship, and as South Australia tends to be pretty dry and arid everything along the river got washed out.

The one activity we managed to go ashore for was a trip to a remote country farm to see sheep shearing and other remote country type things. As the cruise is aimed at sex/sept/octogenarians they have some covered caravan type trailers towed by 4×4’s to take you from the ship to the farm. Did I mention remote yet?

Of course on the way back to the ship, the vehicle got stuck! Being the youngest guests by about 30 years, John and I naturally wanted to help get them out of the mud so that the frail oldies didn’t have to walk through the muddy, snake filled bush up the washed out dirt road. 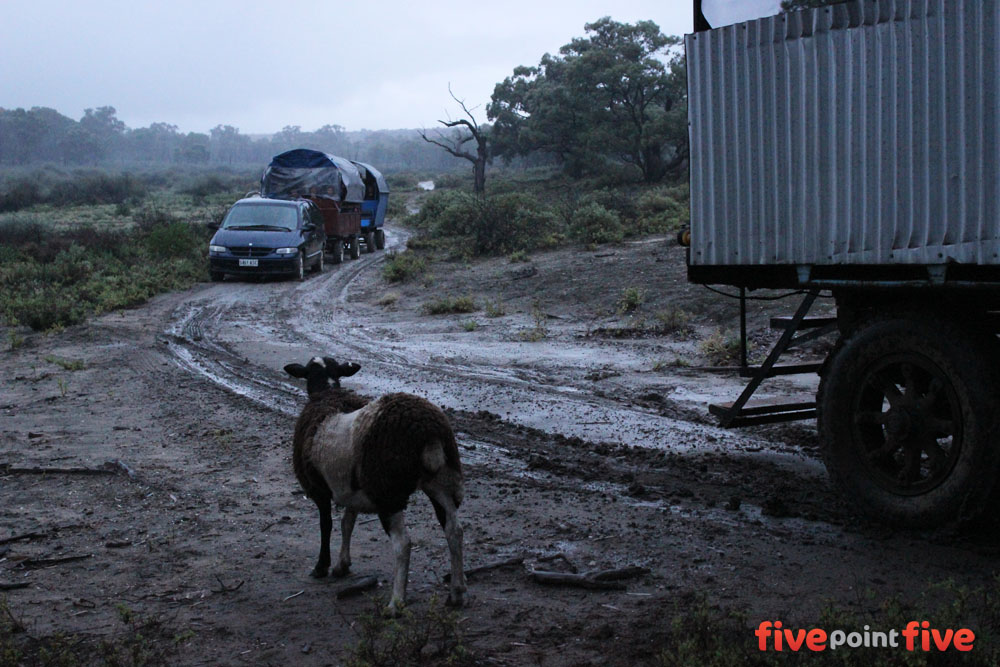 In the end we got one of the vehicles out to drive the oldest of the oldies and the farmer told us he would just leave the other one there until the rain eased up.

If there are enough A’s in a group I immediately turn into a C! Is that so bad?