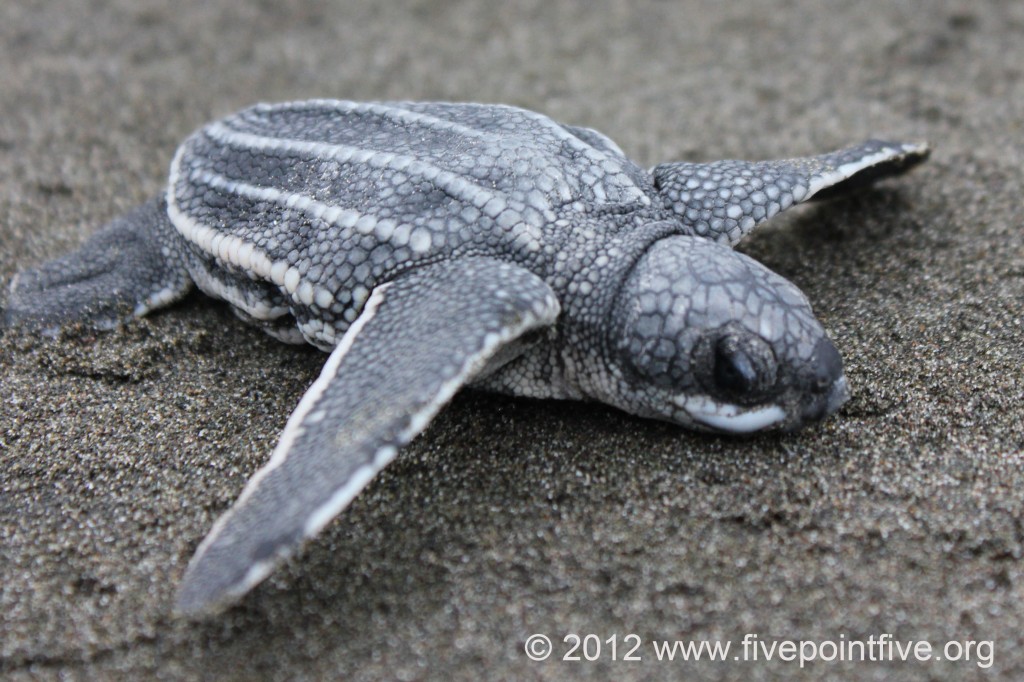 A little baby Leatherback makes it’s way to the ocean

In early July we set off to volunteer for a program managing turtle conservation at Pacuare Nature Reserve on the Caribbean coast of Costa Rica.

Originally we were planning to go to their Panamanian reserve in Bocas Del Toro, but the leatherback turtle season ends earlier there and we missed the end of it.

We only planned a week there as there is no power (and internet!) otherwise we would definitely have stayed longer because it was an amazing experience!

The reserve was purchased in the 1990’s by John Denham, who knew that this was an important nesting area for turtles. Once he bought the land he dedicated the beach to their protection.

Turtle eggs are considered another form of seafood for local people and they fetch a good price. For this reason it is hard to dissuade people from selling the eggs when one big sale can earn them a month’s wages. Having patrols on the beaches makes it difficult for poachers to get to the nests and it has made a huge difference to the numbers in this area. 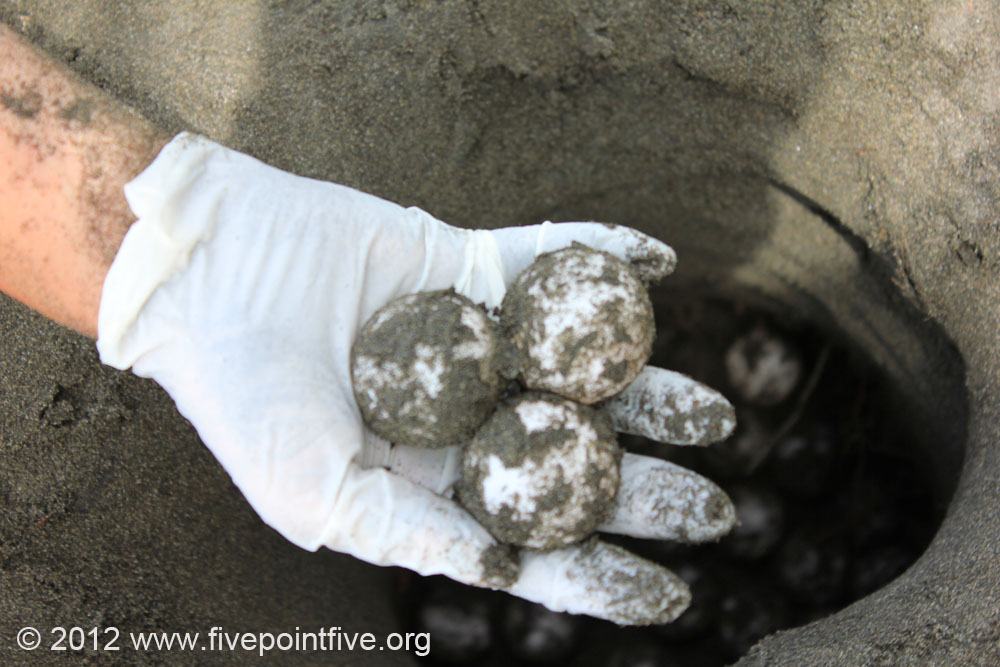 Moving Hawksbill turtle eggs to a safer spot on the beach

Up close with the turtles

On the first night patrol we saw a (small) 400kg leatherback nesting and laying her eggs, it was incredible! I have seen many smaller species of turtle while scuba diving but seeing such a large beautiful turtle up so close is something I will never forget.

Over the next few days we helped dozens of little baby hatchlings leave their nest and on the second to last night we saw a large hawks bill turtle on shore, she ran away but again it was a breathtaking moment.

We arrived right at the end of the leatherback season and at the beginning of the green turtle season. Over the course of the year over 1000 leatherbacks make their nests here, so it gets really busy at the peak of the season with turtle traffic.

It is estimated that of every 1000 babies only 1 makes it to reproduction stage which is not a great statistic and the leatherback is critically endangered at present, we really do need to work at protecting these amazing creatures and this conservation program is one that is showing results. 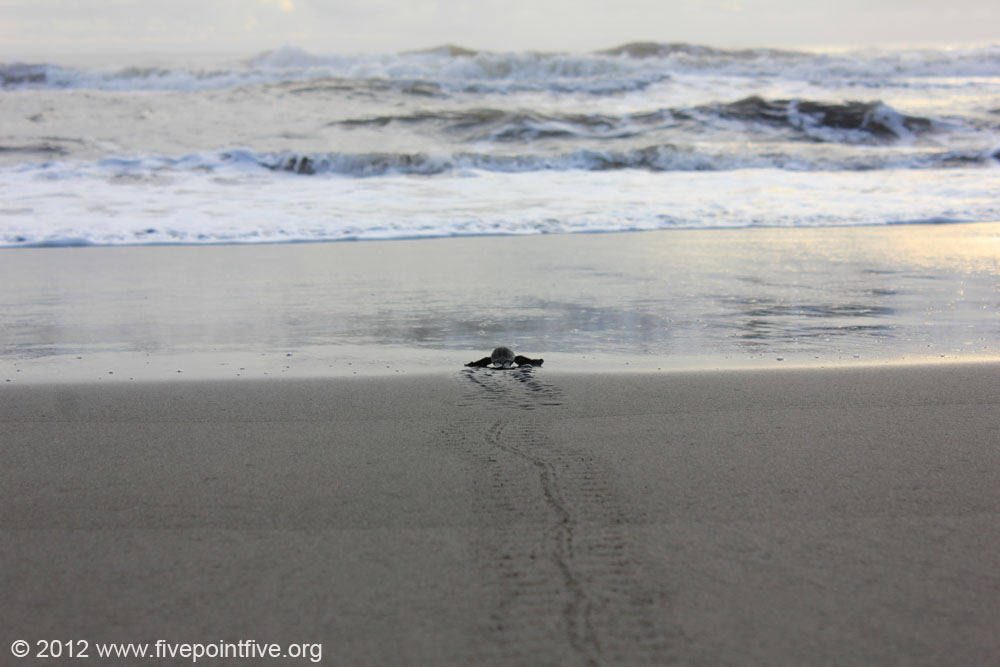 Will she be the one in 1000 that makes it to adulthood?

The volunteer program is run out of two stations one at each end of the beach. In each station is everything you will need for a stay in the jungle; accommodation in wooden houses on stilts, bathrooms, a kitchen, dining room and communal areas.

There are also monkeys, sloth’s, frogs, ocelots, jaguars, pumas and a whole plethora of amazing birds, insects and animals that call the area their home.

Meals are healthy, filling and delicious and cooked 3 times a day. Volunteer’s time consists of: 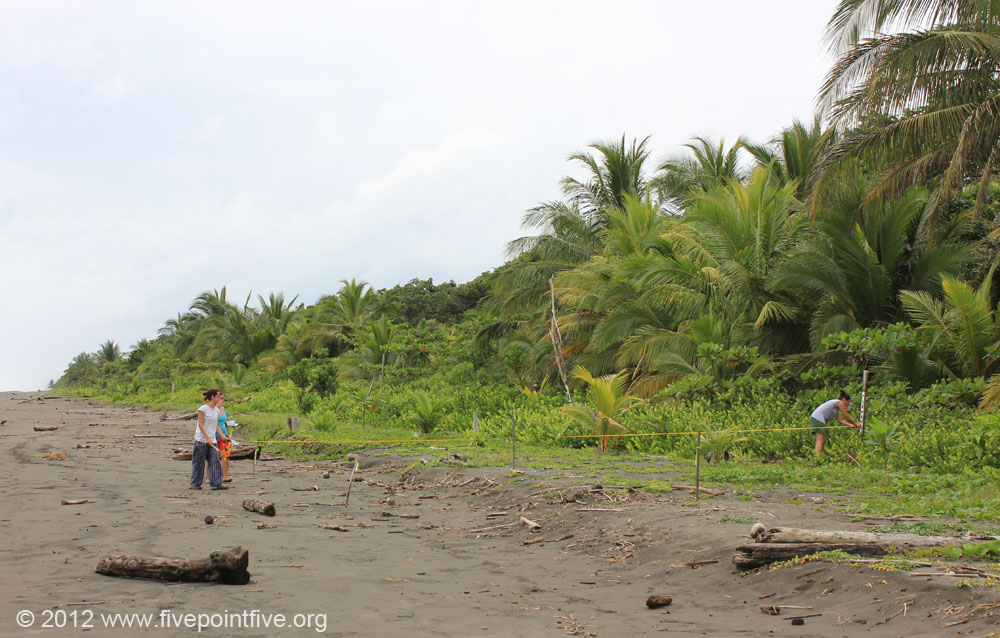 The turtle conservation program costs $195 per week including food and accommodation. We had a fantastic time here and learned so much about the turtles. The people are lovely, helpful and the camps are very well set up.

Note: We recommend bringing a mosquito net and a digital watch!

If you are unable to visit in person you can support the project by making a donation on the turtle conservation website. Every bit counts!