When Dr Assil Russell watched the documentary called “In My Mother’s Arms” she was heartbroken. It was about a man called Hisham and the unofficial orphanage that he runs for boys in Bagdad in a two bedroomed house. Without him, these boys would be begging for food, with no home, no caregivers, no education and no healthcare.

It’s estimated that one in five children in Iraq are orphans, but Assil believes there are many more and she knows that the number is growing every day. These children have no access to basic medical or dental care; simple infections and tooth decay can become life threatening because they go untreated.

Many of the children have terrible injuries from explosions, and many are born with deformities – a legacy from the uranium depleted weaponry used in the war years. 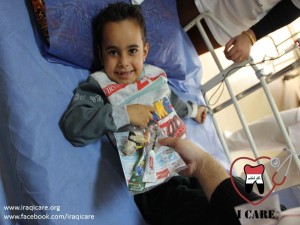 Assil knows how hard life is in Iraq for children without family to look after them because every day she hears their stories. She is the founder of ICARE (Iraqi Children Aid & Repair Endeavour) – a charitable organisation that is dedicated to providing whatever is necessary to make sure that the orphans in Iraq have the medical and dental care that they need, often saving their lives.

It started when Assil stumbled across a video on YouTube when she was a student studying dentistry in Dunedin, New Zealand. The video was of a little girl in Iraq who needed a life- saving operation. Assil had no money to send, but she did something else that was to have a much longer lasting impact. She wrote a cookery book which she sold to raise the money that was needed for the little girl in the video.

The cookery book was the catalyst for ICARE, now a registered charity in New Zealand. 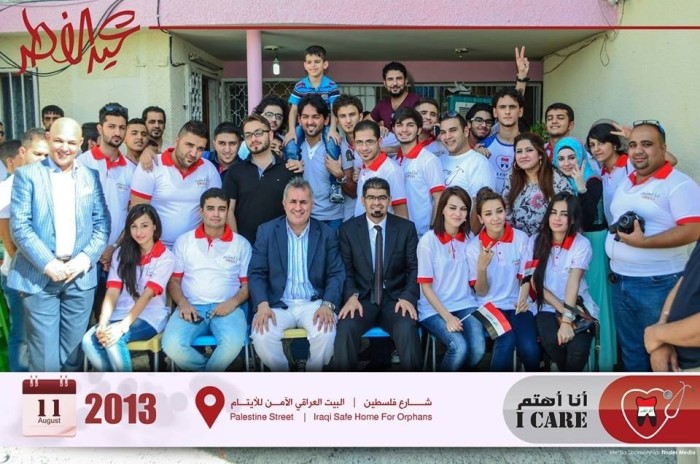 Assil has since graduated and is working in a dental practice in Hamilton, New Zealand and ICARE is going strong. Head Office in New Zealand is the engine, making sure that ICARE stays true to its values and aims.

ICARE has branches operating in New Zealand, Australia and Iraq, with plans to expand to more countries. There is no Government funding; everyone volunteers their time. Assil keeps her eye on it all but insists that ICARE belongs to everyone. There is no room for job titles, hierarchies or egos.

In Iraq there are over 100 ICARE volunteers – doctors, dentists, teachers, artists, musicians, translators – who are the on-the-ground team. For Assil, these are the real heroes. In a country where the simplest things are difficult and dangerous, the Iraqi team identify children who need treatment, and the international ICARE team raise money to provide the care that is needed. Assil calls this the Sponsor A Smile programme. 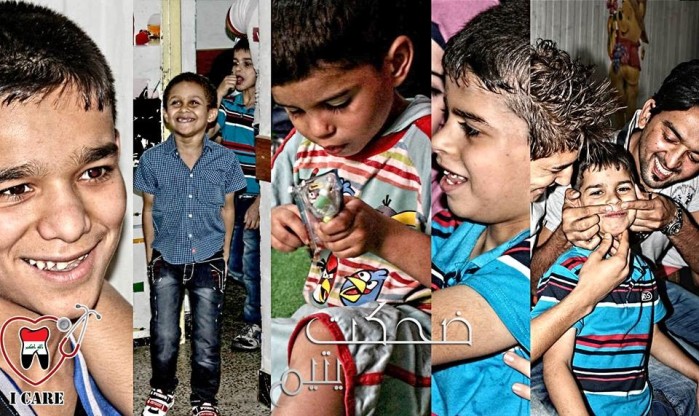 Everything hinges on the power of networking and bringing people together who care. ICARE is a non-discriminative charity and is not concerned with religion or politics. “

“We are often the last resort for these children” says Assil. “In Iraq there are more children needing help every day and fewer people to provide it. We try to provide help where it’s most needed and least available, but it’s hard to make decisions about which child we can help. We’re making change on a small scale. Improving the lives of children in Iraq one smile at a time”.

Assil recently saw Hisham and his boys again. They were at a party and they were smiling and laughing in photographs taken by ICARE’s Baghdad team in Iraq. For a month the team of volunteers, in three provinces of Iraq, planned simultaneous party events for orphans and sick children. This included provision of donations, gifts and health education programmes for the children.

Unbeknown  to Assil, the ICARE team in Bagdad directed by Dr. Shahad Al Ebadi, had organised to host the party for the boys in Hisham’s orphanage. The ICARE volunteers brought food and balloons, and there was face painting, music and games. 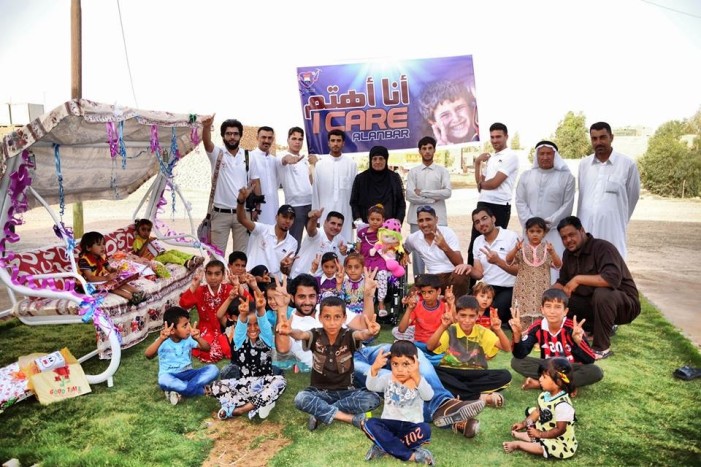 In New Zealand, the team had previously spent days making health packs, containing a kiwi toy, a toothbrush and toothpaste and some basic health education. Simple things, but for children who have never had a mum or a dad to show them how to brush their teeth or to tell them why they should wash their hands, this caring gesture could be life changing. 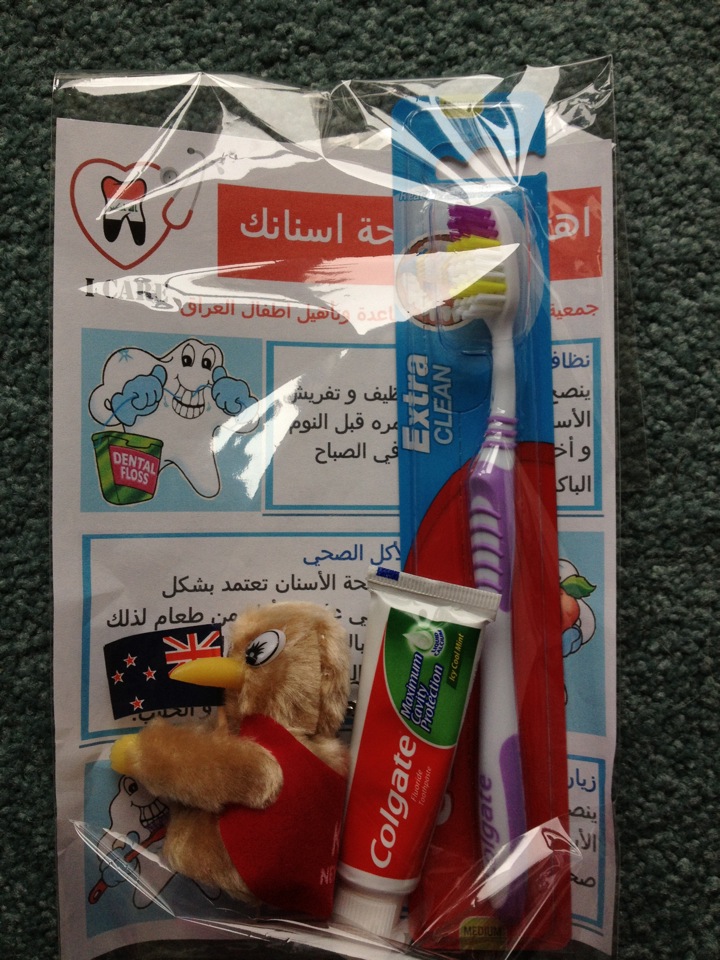 Most exciting of all for the soccer-mad boys was a visit from their soccer heroes. For many of Hisham’s boys, this was the first time they’d had such a party. For Assil, it was a miracle that ICARE was able to help the same man who she had seen in the heartbreaking documentary.

ICARE has a life of its own now but Assil is still spending her evenings and weekends on Facebook, Skype and email, making sure that everything is running smoothly and organising fundraising and awareness events in New Zealand. She regularly travels to Iraq with other New Zealand based volunteers to work alongside the ground team.

ICARE is Assil’s second full time job but this young dentist is also involved in local community work. Every year she donates her time and skills to the Revive A Smile project, which provides free dental care to some of the homeless or low income people in Hamilton.

“These are people who haven’t had any dental care for years. They are scared and embarrassed to see us but we are able to put a smile back on their face” she says, with a smile of her own. 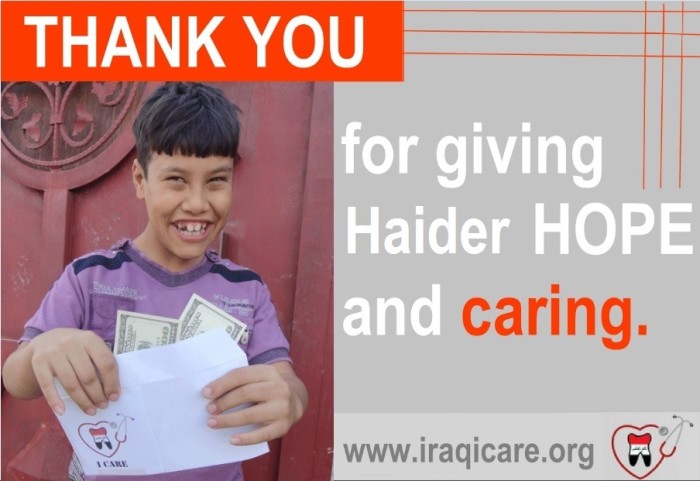 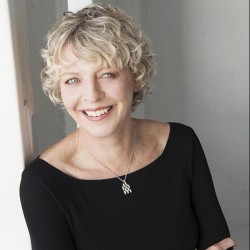 Donna McTavish
Donna McTavish is a Scottish born Kiwi who loves road trips and stay-cations, and
blogs about them here www.thelocaltouristnz.com.
She speaks Italian when she can, makes a mean flat white and loves black and white
movies.Donna spends a lot of time in her business www.englishforbusiness.co.nz
helping people to be more successful by sharpening up their language skills but when
she's not, she's busy finding people who are changing the world one smile at a time,
and believing that they can.

Latest posts by Donna McTavish (see all)
Spread the love