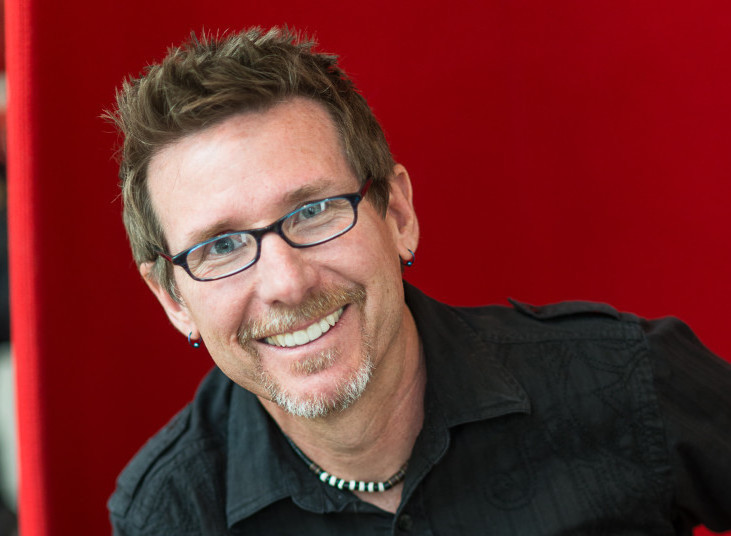 Our newest CALI Award winner is Evan Grae Davis. Evan recently released his first feature length documentary film, It’s a Girl, which asks why nearly 200 million women are missing in the world today – killed, aborted and abandoned simply because they are girls.

Q: You’re a filmmaker and activist. What does being an activist entail?

Evan: I believe that most of us are activists in some way. Anyone who steps up and takes action to make a positive change in their community, society or in the world is an activist. In my case, making my documentary film, It’s a Girl, as a tool to educate and mobilize a movement to end gendercide in India and China.

This makes me an proud activist – defending the rights of millions of girls in India and China, to live out their destiny with dignity and equality.

Q: What inspired you to make the movie “It’s a Girl”?

Evan: I have spent the last two decades traveling the world, capturing stories of human need for humanitarian aid and development NGO’s and non-profits. Throughout this time I witnessed a lot of injustice.

I began asking the question, what are the cultural roots and mindsets that allow for human rights violations on the scale seen throughout the world today? I set out to explore this question through a documentary film.

The team and I travelled to nine nations capturing stories for this film. One of the nations we visited was India, hoping to understand how the subjugation and devaluation of women could be justified by the deeply established son-preference culture.

What we discovered while filming in India about the epidemic of missing girls, and dramatically skewed sex ratios, the related abuse and neglect of girls, was a game-changer for us. After hearing the UN statistic of as many as 200 million girls missing in the world today as a result of ‘gendercide’ we researched the issue in China as well.

We were completely astonished by how few people seemed to be aware of what appeared to be the greatest human rights issue of our time, and certainly the greatest form of violence against women in the world today. There seemed to be very little out there on the topic. It was then that we determined to dedicate the film project to exposing this untold story.

Q: It’s a Girl has influenced many people to act – what do you think about that?

Evan: We have been honored and humbled by the amazing response to It’s a Girl!  In the year since It’s a Girl hit the world stage, nearly half a million people have joined the cause, with thousands more adding to that number every week!

Nearly 1 million actions have been taken, ranging from signing petitions to donating to our partners working on the front lines to combat gendercide in India and China.

Hundreds of screenings have been held in over 20 nations, including at the British Parliament in London, the European Union in Brussels and on Capitol Hill in Washington, DC. It’s a Girl has been acclaimed worldwide in articles, reviews, on radio and TV, including The Independent, Emirates Women Magazine, The Current on CBC Canada, BBC, NPR, and New Internationalist to name a few.

It has been featured and recognized at leading Human Rights Film Festivals like Amnesty International’s Reel Awareness Film Festival and the “This Human World” human rights film festival in Vienna.

Q: So, how does culture change occur on this scale?

Evan: The mass killing of girls and women is a complex issue, but at the root is a strong cultural preference for sons. The centuries-old traditions that say boys are more valuable than girls are so established within the social fabric of India and China, that killing girls has become a social norm.

In examining historic cases of massive human rights violations like the Jewish Holocaust, the trans-atlantic slave trade or Apartheid in South Africa, the offending class embraced the atrocity as culturally acceptable and these violations were only ended through outside intervention.

It is human rights bodies, like the UN, and members of the world community, like you and I, that must speak out on behalf of the millions of women suffering subjugation and violence in India and China.

With enough pressure, laws protecting women are established and enforced, and, as can be seen throughout history, even deeply engrained cultural practices like foot-binding in China can end within a generation or two if justice is demanded and consequences are stringent enough.

Evan: I am most proud of the many who have responded to the call to action and become culture changers and activists within their own spheres of influence, as a result of seeing It’s a Girl.

Besides the ongoing dedication of organisations like Women’s Rights Without Frontiers and Invisible Girl Project, there have been some who have stepped up and taken action representing the kind of response we could only dream of.

People like Deesh Sekhon, a wife and mother from Abbotsford, BC who after seeing the trailer, launched GirlKind Foundation, which is advocating and educating for change in cultural beliefs and taking a stand against Gendercide in India.

People like former UN diplomat Michael Platzer and his team, who, after seeing It’s a Girl, organised a one-day symposium at the UN in Vienna on fighting femicide (gendercide). Ambassadors, social scientists, NGO representatives, statisticians, lawyers and feminist activists had the opportunity to speak about gendercide, explain its meaning and causes, and present examples of best practice in fighting it.

And people like Omékongo Dibinga – a rapper, trilingual poet, CNN contributor, motivational speaker, TV Talk Show Host and the Director of UPstander International who, inspired by the It’s a Girl trailer, decided to lend his voice to the cause by writing and recording a hip-hop song.

Omékongo captured so well the inner conflict so many of us experience when learning about gendercide, that we decided to produce the It’s a Girl music video!

I wish I could mention all of the champions who have stepped up after seeing the film and made it all worth while! We look forward to seeing what the next year brings.

Evan: I grew up watching my parents serve those in need around them – in their case, helping people recover from addiction and homelessness. This established in me a desire to dedicate my life to helping others. From my first international trip nearly two decades ago to now, dozens of countries later, I am still deeply impacted by the scale of human need throughout the world.

I am privileged to have been born into relative prosperity and to have worked hard to develop a skill in telling stories that can present the plight of those less fortunate. I’m driven by the hope that those who see my films will likewise be challenged to get involved on some level and invest their talents and resources in making the world a better and more just home for all.

Evan: If I had my way, everyone in the world would take at least one opportunity a day to find someone very different than themselves and have a five minute conversation with the goal of learning something new about the hopes, dreams, challenges and views of those around them.

I believe one of the great tragedies of mankind is our tendency to isolate ourselves into cliques, clubs and communities of people who are just like us. Division and conflict results from our inability to understand and empathize with the experience and views of those from different ethnic, political, religious or personal backgrounds.

I believe five minutes a day spent expanding our perspective in this way could change the world.

Q: And finally, how can people watch the movie?

Evan: The It’s a Girl action and screening campaign is currently underway. Screenings are occurring all over the world. Anyone can bring the film to your community and help spread the word about gendercide. You can locate screenings near you or learn more about hosting a screening on our website.

The website also offers many ways you can get involved and take action to help millions of girls in India and China. The film will be available on iTunes and DVD September 24th, 2013 and on additional digital streaming services in October.

Husband, father, filmmaker, activist; Evan Grae Davis has traveled the world with camera in hand for nearly two decades advocating for social justice through writing and directing short documentaries and educational videos mobilizing support for non-profits and NGO’s championing the cause of the poor and exploited.

Evan is now beginning production on his next film entitled Husband Eaters, which will explore the plight of over 80 million widows in the world today being targeted daily for rape, torture and murder or who are forced into prostitution and remarriage, many of whom are victims of property theft, social isolation and physical and psychological abuse.