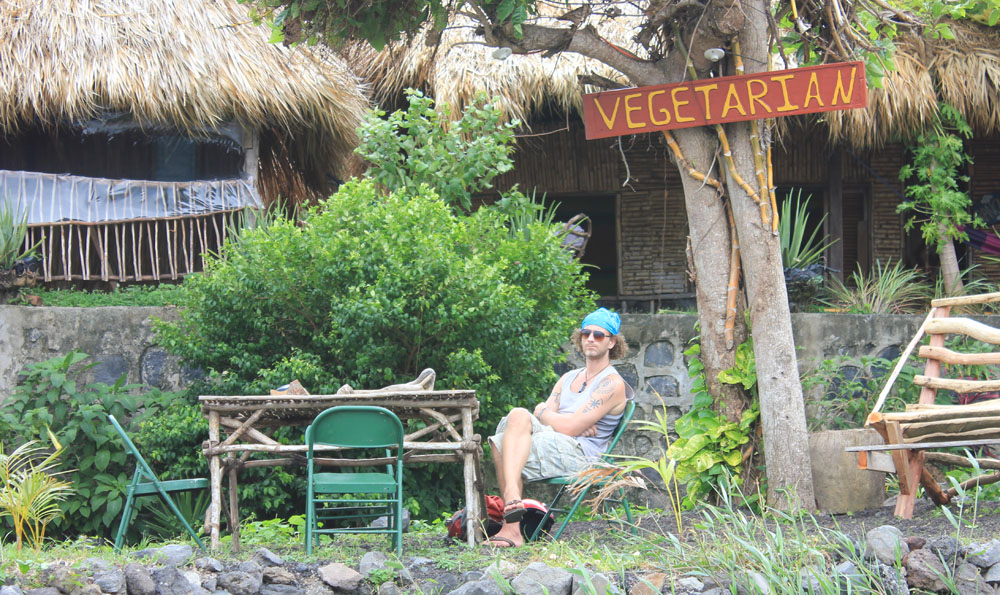 Travelling as vegetarians in Latin America can be an interesting experience.

Your choices can be a limited and it you don’t speak Spanish it can be frustrating trying to get alternatives!

Latin America is huge, and vegetarianism is commonplace and well catered for in some places, and completely new and met with shock in others.

Generally you will find many more options in large cities, developed countries and major tourist towns. You will find less awareness in remote towns and in poorer countries like Cuba and Nicaragua.

Even in these places however, people are generally very friendly and willing to accommodate. They may ask you a million questions about why, but with a genuine curiosity. Meat is still considered a luxury in some places and you as a rich foreigner (in their eyes) choosing not to eat it is very interesting.

Here are some tips we have found for getting a somewhat balanced diet in places where the concept of vegetarianism has not even come up yet.

1. Explain each of the meats that you don’t eat!

At first we would say no meat “no carne” but people would assume fish, pork, ham and chicken would still be ok! Carne translates literally to “meat” but in the context of saying you don’t eat meat it tends to get lost in translation. Now we are clear by saying , “no carne, pollo (chicken), jamon (ham), pescado (fish) y cerdo (pork).” And/or “no animales”.

2. Help them find a vegetarian replacement

In places where vegetarianism is less commonplace, people can lack creativity in finding you a replacement. If you ask for no meat in a meal, they will give you the same meal as other people without the meat. So you just get a few sides!

3. Make the most of lunch specials

Lunch specials are a common offering in Latin America where you will get 2 or 3 courses with a drink for $2-4. It is usually made up of a soup, followed by a main meal of fish or meat with rice, beans, plantains and a small salad. It will usually have a fresh fruit juice and occasionally includes desert as well (fruit).

As a vegetarian this will be one of the easiest meals to order, as the sides will give you plenty of protein and there is usually some variety on the plate.

4. Stay in places with kitchens

Due to the lack of variety of healthy choices in general we prefer to cook whenever we have the chance. In many countries including Mexico, Panama, Costa Rica and Colombia you will find massive supermarkets with a range of international options.

Nicaragua, Guatemala and Ecuador have smaller independant supermarkets, Venezuela has small corner stores with very little range, and some shops will just sell eggs or cheese.

In Cuba there are supermarkets but they only sell rum and biscuits (seriously!).

In all places (except Cuba) you will find plenty of fruit and vegetables in the markets, usually cheaper than the supermarkets.

5. If in doubt, eat Chinese food

When you want a little variety, there are Chinese restaurants in many places in Latin America, and you can usually order vegetarian chop suey or fried rice and the portions are huge! Chop Suey is basically a huge amount of stir fried vegies on noodles, so if you are needing some vegetables, this is a great option.

6. Be patient and enjoy the moment

We have found explaining food options in another language has been a big learning curve and our  Spanish is better because of it. Although some people have been dismissive, most people are happy to help you figure it out, so enjoy the chance to learn a bit of Spanish and banter with the locals.

Note: If you are travelling as a vegetarian in Cuba it pays to stay in Casa Particulares and eat your meals in house.

There you have it, our tips for vegetarian travel  in Latin America.

It has been an adventure finding vegetarian food but in general we have a relatively well balanced diet here and other than one or two meals we have never gone hungry!! Every one in a while we will find a place that caters beautifully to Vegetarians and it’s true, it does leave a spring in our step :)

Note: There have been many things that have influenced our decisions to be vegetarian, some excellent resources include the film Earthlings & the book Eating Animals.