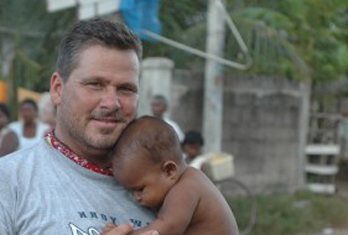 Our newest CALI Award winner is David Hill. David had a life changing moment, after a chance meeting with a waitress. The result was One Spark, where David believed that if he could change one life, it would be worth it. Millions of people later, he feels that it’s been well worth it!

David: Our mission here at One Spark, is to change the world one spark at a time by encouraging random acts of kindness. We are a multi-faceted, non-profit organisation providing life saving and enriching assistance.

We operate several different charities, including Pennies from Heaven and Santa’s Workshop, which are dedicated to improving the lives of others and helping to meet their needs.

Our organisation is constantly evolving in order to better serve the community, and our spark givers pride themselves in reaching out to others, both locally and across the globe.

Q: What inspired you to set up 1 Spark?

David: Once upon a time, I wasn’t a very nice person. I was an unhappy, prideful, selfish and mostly uncaring man who made a lot of people, very unhappy as well. I never took time for my family or cared what they were doing or what they thought. I didn’t even take the time to answer their calls because I was a big man with an agenda and it was all about me.

About 10 years ago, while still in my wretched misery that I called ‘life’, I met a waitress. She was just a nobody with an apron and a huge chip on her shoulder. That particular day, she had the good fortune of being the one who would be waiting on me in the diner where she worked.

I was in a bad mood, but it was evident that her mood was even worse than mine. I can tell you right now, there were no niceties exchanged between the two of us. When she addressed me, I responded with irritability and complaint and in kind, she retorted with snapping and grumbling. We were quite the pair.

We did battle with one another during the dinner service and I made her chase after every one of my whims – a new fork, another napkin, a cleaner glass of water. Nothing was good enough for me and I was going to make her work.

After some time of barking orders to her, I began to converse with her in a more civil manner. With some kinder words, we both seemed to soften a bit and eventually I asked her to sit and talk a while. It wasn’t a long talk and I don’t even remember what we even talked about. But for such a short conversation, she had quite an impact on me. I felt my mood begin to lift.

She brought me the check, less than twenty dollars in total, along with her declaration that I had no idea what this shared moment had done for her. Leaving the diner, I attached a one hundred dollar bill to the check along with a note on a napkin. I wrote a few words, telling her how much I had enjoyed our conversation and the way it had changed my disposition for the better.

I just wanted to say, “Thank you.” I went on to say that if there was ever anything I could do for her, to let me know. A couple of weeks later, I received a small box in the mail. Upon opening the box, I found a note. The note went something like this…

“David, I had to write to you. I am not sure if you understand the power your words had on me that day – the way it caused me to change the direction of my life. I felt like no one cared about me and there was no point in living. My plans were to go home after work and commit suicide. Your kindness brought me back from the dark side. I really can’t afford much, but please accept this gift.”

I looked in the box, but didn’t see anything. After tilting the box to the side, it rolled across the bottom and I saw the metal object… it was a bullet. She went on to say, “This was the bullet that I had meant to use to end my life, but I no longer need it…”

I was certainly relieved that she had not harmed herself. I was really shocked and taken aback about the whole thing. She was actually going to kill herself! Wow! But, with just a few words between us, there had been a difference made in our lives – so much so, that she wanted to continue living!

She had helped me. I had helped her. We had connected somehow on a level that left us both changed forever. After all that, the truth is I never did see her again. I do think of her often though, and hope she is enjoying a wonderful life.

Q: What are you aiming to achieve?

Q: How does it all work?

David: This is a picture of the card that we encourage people to pass out, and I believe it says it all. We encourage everyone to do 1 Spark a week, and write down each one that they do. We ask them to write us a letter after they have done 25 Sparks and tell us if they think it is making a difference in the world.

Q: What is something from this project that you are really proud of?

David: Last year 33,000 kids did not commit suicide. We helped 55,000 kids with cancer, with a Cover For Cancer blanket. Our Tipsy Taxi program takes home about 200 people per month, who are drunk, for free.

David: To leave the world a better place, than it was in when I found it. The fact that I am challenging the students to take charge of their schools, and infuse them with love and kindness.

David: Yes, absolutely! But not just for me, One Spark is a combination of millions of people being kinder to individuals and brightening their day. I said when I started this, that if I touched 1 person it would all be worth it – and I can say we have touched millions.

David: Sparking people to keep the ugliness of the world away. We have found that the only way you can change the world, is to change the individual. I know that this change will keep going, because we have touched the hearts of many.

4 thoughts on “David Hill – Winner of the CALI Award”