Our newest CALI Award winner is Mary Hutton. After learning about bears being kept in dreadful cages in Asia where the bile was being taken from their gall bladder and how abused they are, Mary knew she had to do something to help and so set up Free The Bears Fund (Inc).

Free The Bears Fund (Inc) is an organisation whose sole purpose is to “Protect, Preserve and Enrich the lives of bears throughout the world. 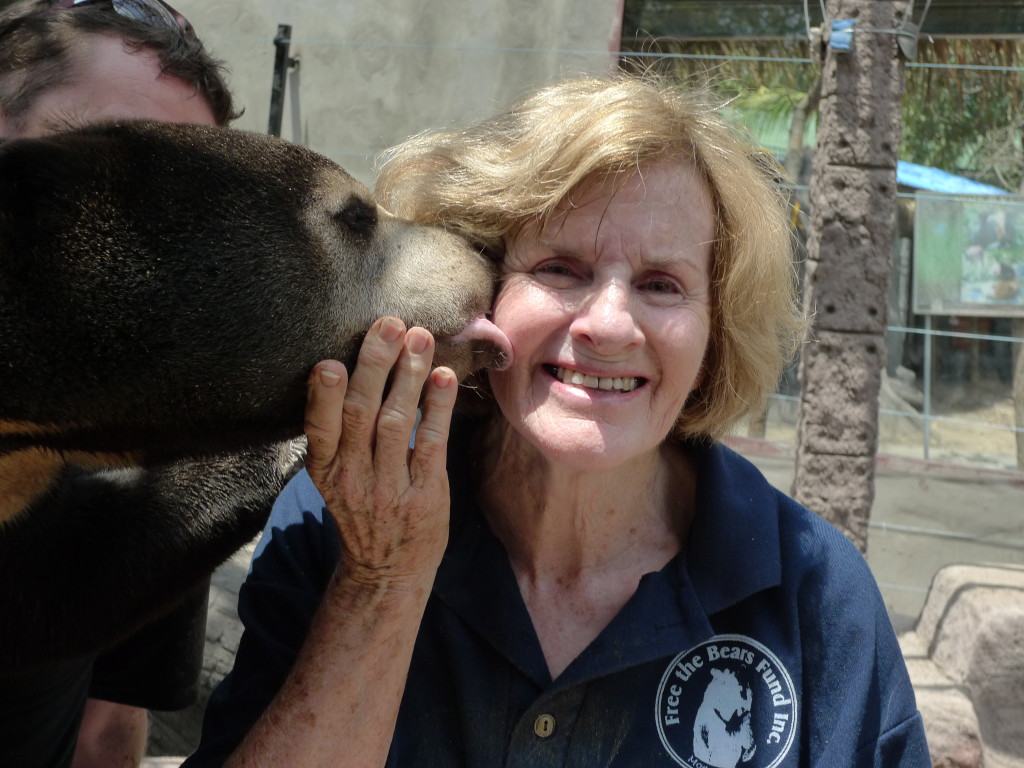 Mary being greeted by Dilli. “Sun bears are my personal weakness”.

Q: Tell us about Free the Bears.

Mary: Free The Bears Fund (Inc) is an organisation whose sole purpose is to “Protect, Preserve and Enrich the lives of bears throughout the world.

This is achieved by working in several countries in SE Asia where bears are abused, exploited and taken to feed the Wildlife Trade which is rampant throughout certain countries in South East Asia.

To date we have saved bears from poachers, the restaurant trade where bears are killed to be eaten or paws taken to make ‘bear paw soup’, wildlife markets and the bile farms where bears have their bile taken from the gall bladder to be used in traditional Asian medicines.

We have also brought to an end the ‘dancing’ bear trade in India which has been a cultural tradition for centuries.  Bears made to ‘dance’ to entertain tourists or at public gatherings.  The fund provided the ‘seed’ money to give to the Kalandar gypsy owner of the bear so he could begin another livelihood. He then handed his bear to us to be taken care of for the rest of it’s natural life. 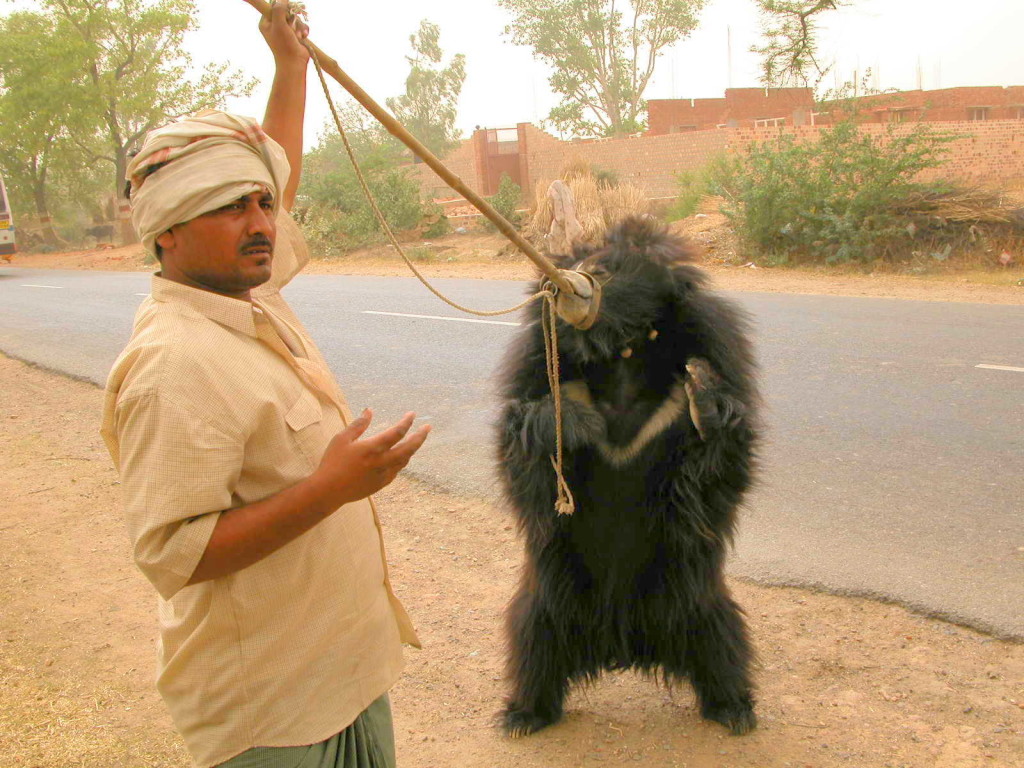 My first sighting of a dancing bear Kalandar with a Sloth bear- I could not beleive what I was seeing.

There are presently over 500 bears in our care in the various sanctuaries we have established in Cambodia, Laos, India and Vietnam.

We are a tax deductible charity where 100% of all donations go directly to the care of the bears in these countries.  The small administration that we have is covered by the sales of merchandise and memberships.

Q: What inspired you to set up Free the Bears?

Mary: After learning about bears being kept in dreadful cages in Asia where the bile was being taken from their gall bladder and how abused they are, never allowed to come out of the cage, not having enough to eat and in dreadful pain when the bile is extracted from the gall bladder.

The TV coverage I saw on that particular day was so upsetting, one could see the bears were in pain from the sad expression in their eyes.  I felt I had to do something to help. Although at that time I was not sure what I could do. 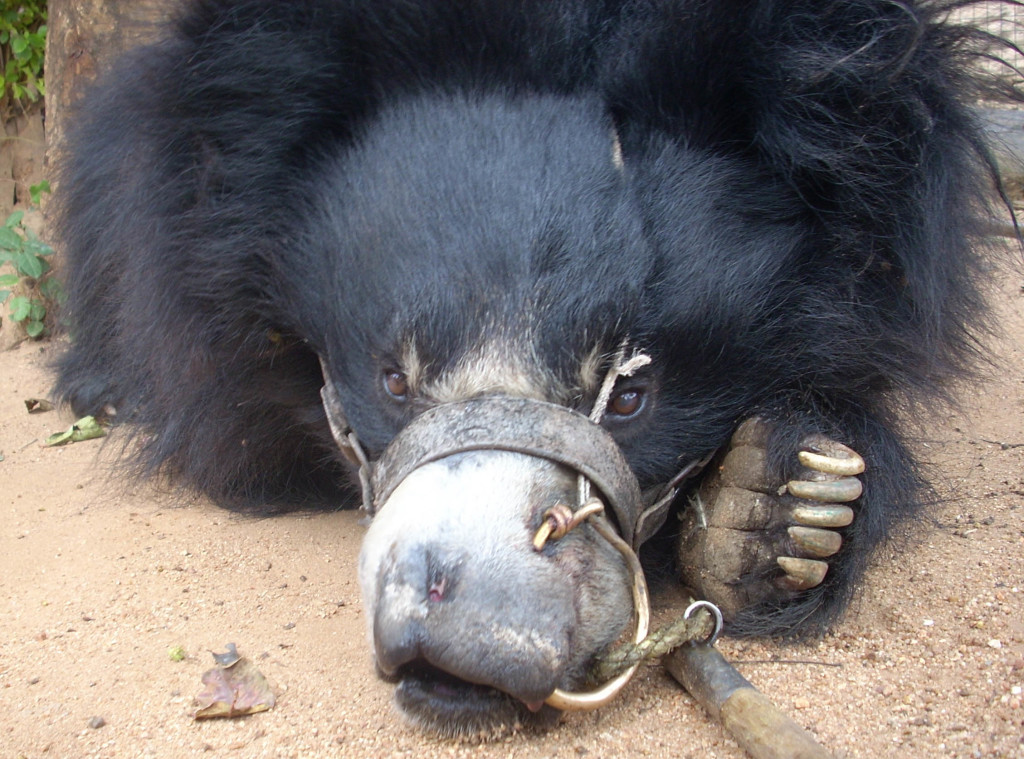 Q: Do you think people’s attitudes to animal rights are changing?

Mary: I would like to believe that peoples’ attitude to animal rights are changing but I am also realistic to know that it is going to take a long time. Education is the key and to address the poverty in the countries where animals are used and abused. But we also have to bear in mind that no country is free from the guilt of how badly some domestic and wildlife creatures are treated.

Q: What have you learned from the animals that you’re saving?

Mary: I have learnt so much from animals in general. They are forgiving, they bear no grudge, they are resilient. 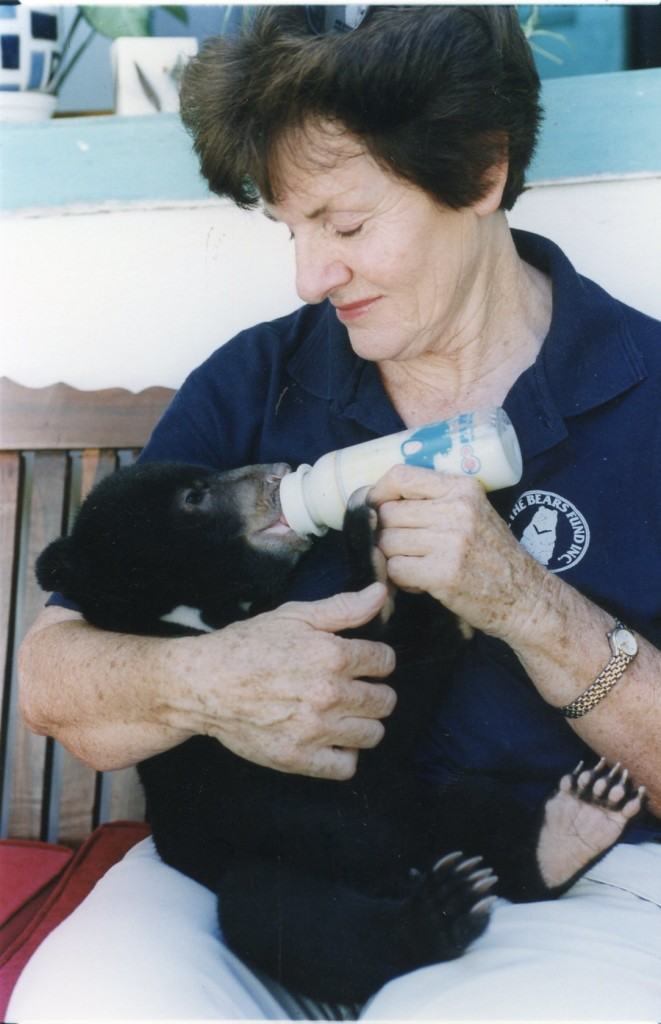 Mary feeding Serey. “I felt it was a priviledge to feed this litle fellow”

Q: Please share a success story from your work that you are particularly proud of.

Mary: I was asked to open a new enclosure we had established in the Lop Buri Zoo in Thailand. The enclosure was for about 8 bears that were all living in shocking cages in a dark and miserable area in the zoo. The day was Peoples’  Day and there were hundreds of children all wanting to see the animals and the bears.

One particular cage was brought to the opening of the new enclosure so the bear could walk right out of the cage onto the grass in her new home. She was an Asiatic black bear although she had golden fur, almost a blonde – she was also known as a golden bear and her name was Bertha.

Bertha came up to the new entrance and very slowly entered the new enclosure.  She padded the grass, like a cat does to make a soft bed. She sniffed the air, walked the whole length of the enclosure, held her face up to the sun, rolled on her back and went to sleep in the sun. 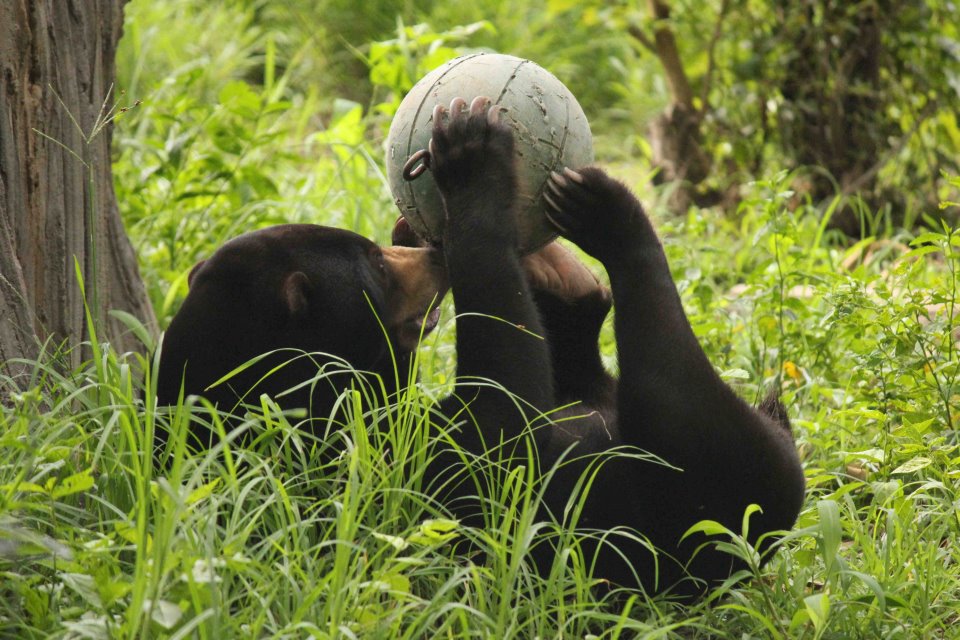 A rehabilitated Sun bear at Phnom Tamoa playing with a treat ball, which is a form of enrichment.

We had put plenty of enrichment in her new home, piles of wood chippings for her to forage and to find the little treats we had hidden. Pieces of fruit, dates and slices of bananas.There were climbing platforms, swimming pools.

Bertha paid no attention to any of these interesting things that had been carefully placed throughout the enclosure. All she wanted to do was to feel warm, feel the sun on her face and just sleep on something other than concrete.

I felt that day that if we did not do anything else, this was surely enough to see the difference we had made to the quality of life for just this one bear.

Mary: I have been asked if I have ever felt overwhelmed at the success we have had in saving so many bears. I am actually overwhelmed by the size of the work ahead of us as there is still so much to do. Until all the bile farms are closed down and until the animals are not used for the wildlife trade and the poaching stops then this is what drives me to continue our work for the bears. 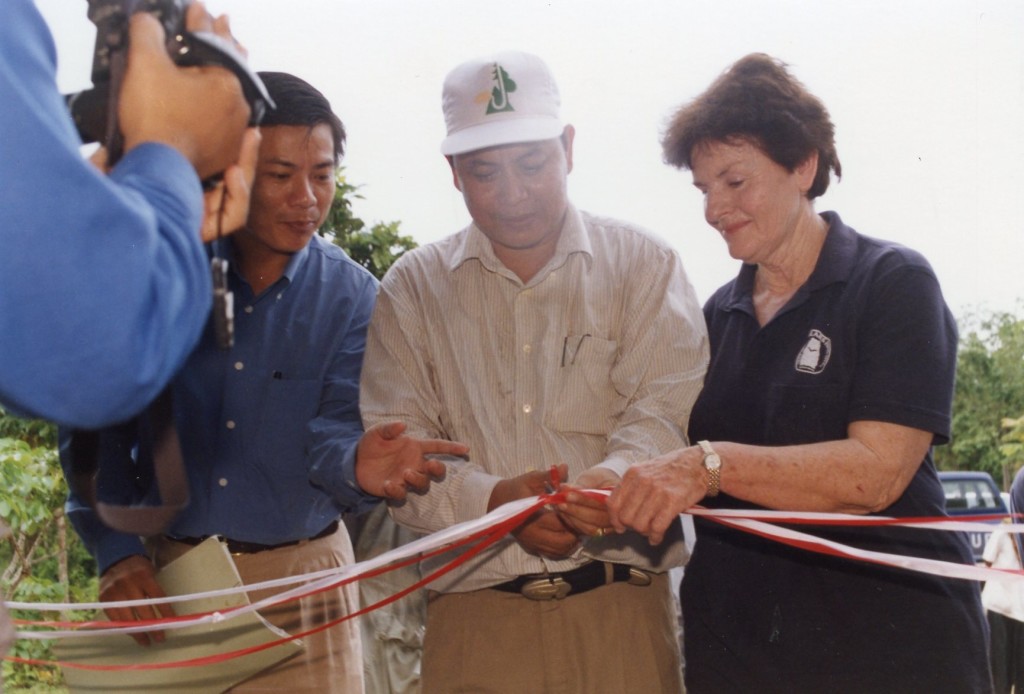 Mary: There is just one reward. To see abused or starving bears nearly on their last legs, to be brought into our sanctuary, given good food, love and the best of care, for them to find the will to live, to survive and to see the expression in their eyes change from one of hopelessness to one of hope. If you look carefully, the eyes always tell a story. 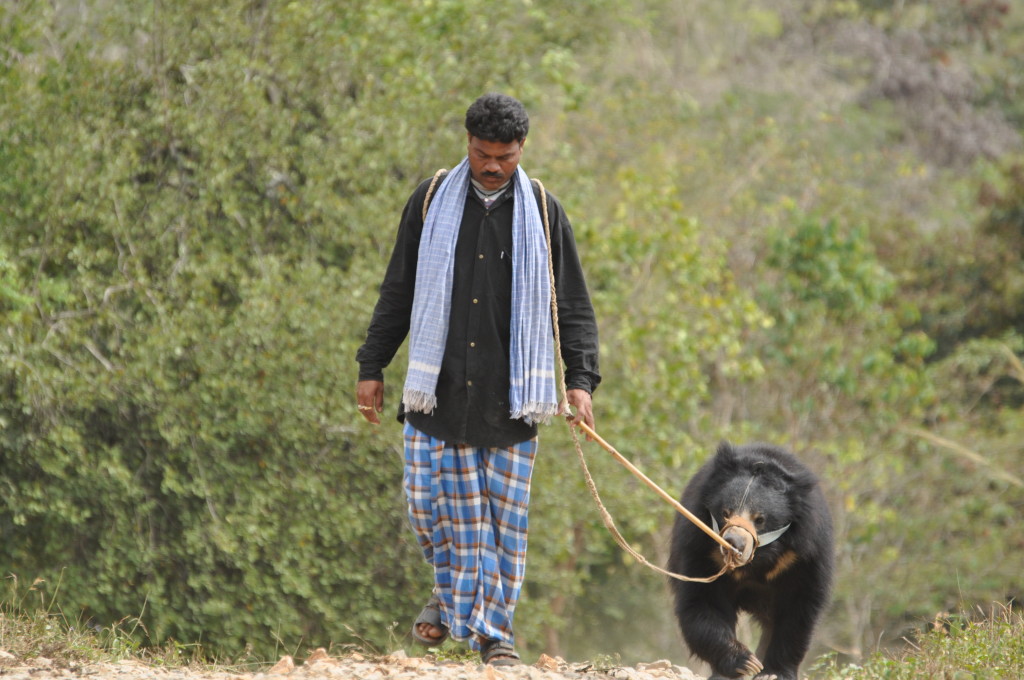 Raju, the last known dancing bear walks to freedom. What a memorable day.

Q: If you had your way, everyone in the world would spend 5 minutes a day..

Mary: I often think to myself, why on earth are we on this planet. Surely we were not meant to kill each other, kill the animals in such shocking ways and to treat them so badly. We were not meant to live like this, surely this is not what life is all about.

When everything is just so wrong in the world it is impossible to make the slightest difference for the good but this is what we must all try to do in some small way. I did not see my life changing like it has. I did not see any of this coming.  It really hit me like a brick. But what I believe is this. If you believe in yourself and the cause is just, just ‘do it’ for you never know where it will take you. 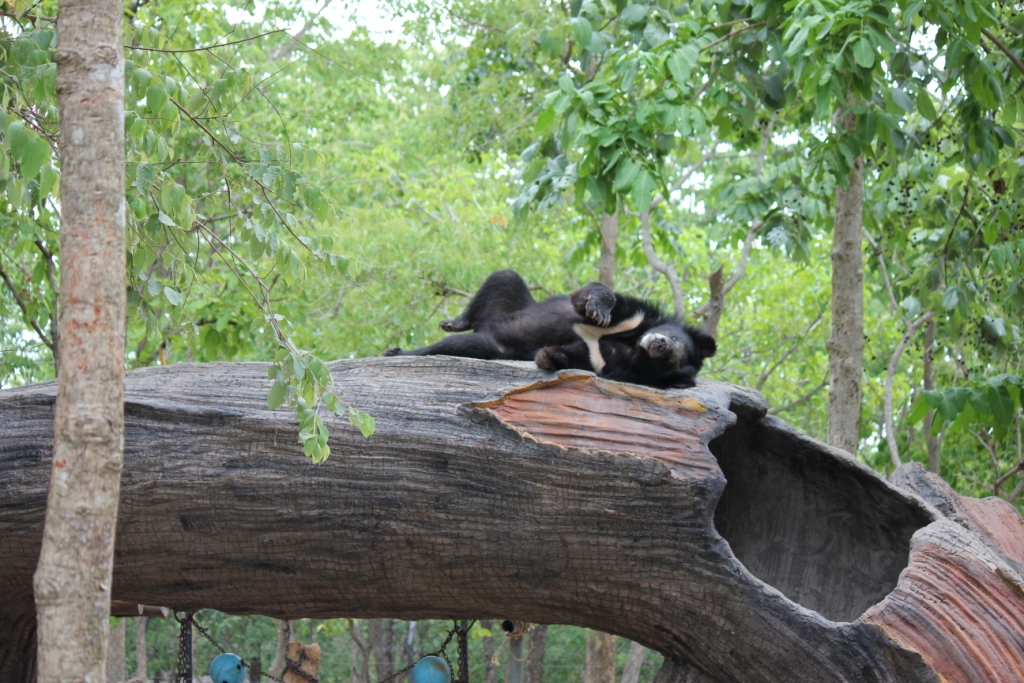 Born in the United Kingdom, Mary Hutton emigrated with her family to Australia in 1970 and now lives in Perth.

When not travelling to South-East Asia to visit sanctuaries, she is working in the office and planning the next fundraiser for the bears. She loves to look after her cats and her garden.

Connect with Mary through Free The Bears Fund (Inc)