With over 50 years of experience within the field, Freda is considered to be one of Australia’s preeminent voices in child protection and has become a respected advisor and consultant of child protection issues around the world.

Q: How did you become involved in child protection?

Freda: By accident! Many years ago when I was employed by London’s  Metropolitan Police at New Scotland Yard I was offered the opportunity to undertake a three month course in child protection, offered by child psychologists and children’s social workers as well as police.

Thereafter I worked with child protection cases. I soon realised that some children didn’t stand a chance in life and I became an adopted ‘aunty’ to some of those taken into care, taking them on excursions and sending birthday gifts. 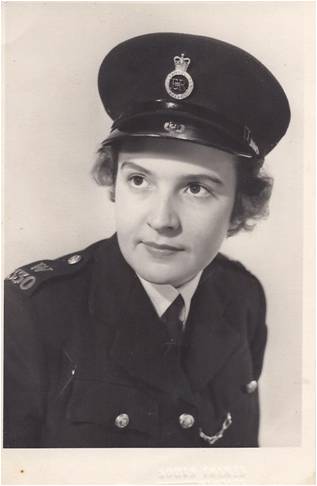 Six years later I moved on to social work and became a foster carer but because social workers worked hours to suit clients (and by this time I had a husband and two children) I turned to teaching.

I left school at 14 and studied for Year 12 by correspondence at the age of 33, went to university and trained as an early childhood teacher. With this unusual background I was placed in the toughest schools in town and realised that I could spot abused children not only in my own class but elsewhere in the school.

I also realised how important teachers are in identifying, reporting abuse and supporting victims and their non-offending parents… roles for which they received no training. Their mishandling of victims’ disclosures of sexual abuse often increased the psychological harm inflicted by their abusers.

I continued studying at university at evening classes and eventually became a lecturer in child development training social workers and pre-school teachers. I introduced the first lectures on child abuse in 1970 although there were no textbooks available at that time. 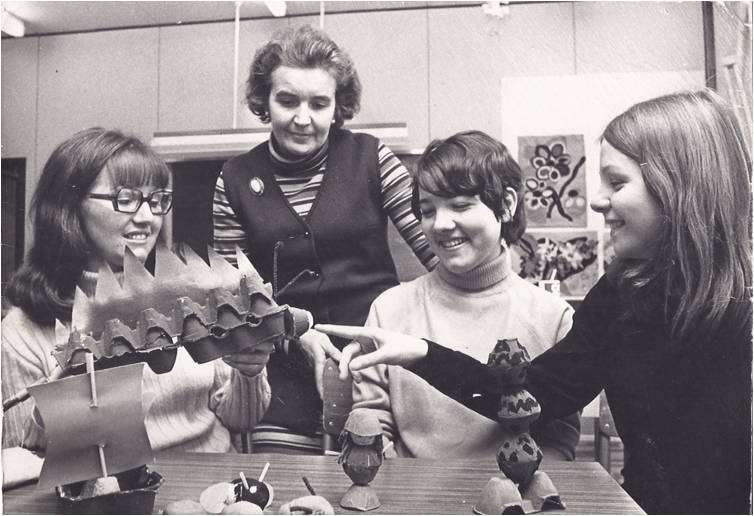 As I had a Masters Degree in Early Childhood Education when there wasn’t even a Bachelor’s Degree available in Australia, I was invited to become Director of Early Childhood Studies and set up new courses at the State College of Victoria to attract mature age students and cater for the migrant areas of North and West Melbourne.

In 1980, I became Dean of the Institute of Early Childhood and Family Studies, later attached to the University of South Australia and there I introduced what I later learned was the first multi-professional child protection course in the world. This came to light when I was invited to assist universities in the USA, Germany and Brazil to create similar courses.

My colleagues thought I was mad. Child abuse might happen in the US (the Americans were making movies about it) but it didn’t happen in Australia… least of all in Adelaide!  And, of course, there were those who thought that child abuse was “welfare” and nothing to do with teachers… “Teachers are only there to teach”, they said.

Furthermore, the academic committee could not comprehend how it could be an academic subject. By that time I was able to show that a substantial amount of research was being undertaken in North America and there was scope for research here.

When child sexual abuse came to the forefront  in the early 1980’s, I had collected all the child protection programs for children used in the US and Canada. I was invited to share my knowledge with Victoria Police who were under pressure to replace Stranger Danger with something more realistic given that 94% of reported abuse involved people known and trusted by their victims. 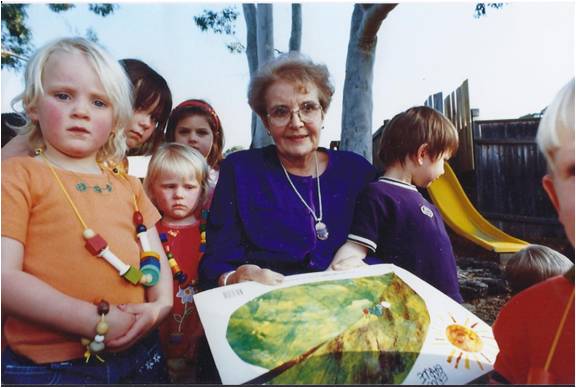 Freda in her work as an Early Childhood Educator

VicPol set up a committee to choose one of the American programmes and they chose Wisconsin. I was concerned that the program they selected had never been tested with children to check their understanding of the concepts but VicPol marketed it Australia-wide. NSW and New Zealand Police rejected it on the grounds that it was too American, too jargoniatic, too simplistic and yet too complex.

They wrote a school program that was developmentally appropriate for all age groups and in 1989-90, I was invited to research the programs with children to find out what they understood. That was the beginning of a 21 year relationship with New Zealand  Police and Education Department as a consultant and researcher with literally hundreds of children of all ages. 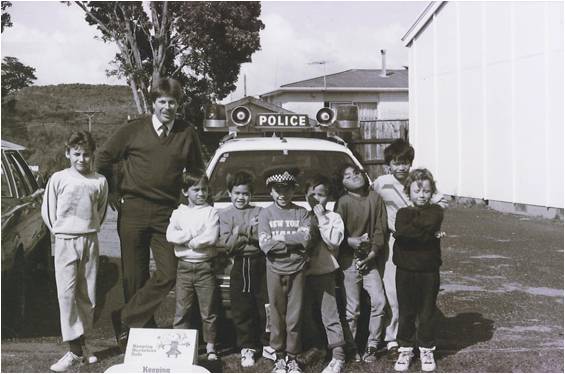 Evaluating the child protection program “Keeping Ourselves Safe”
with children in NZ schools for NZ police. 1990

From there on, I conducted research with child sexual abuse victims, their non-offending parents, male victims and male sex offenders in jails to learn how and why they made the transition from being victims to becoming victimisers.

I learned about the grooming methods they used and how children responded then went on to write twenty books for parents, professionals and books to use with children, including those with intellectual disabilities.

In 2011 ‘Smart Parenting for Safer Kids” was released followed by “Child protection – The essential guide for teachers and professionals whose work involves children (JoJo 2012). Most of my work was self-funded as few organisations have budgets for child protection and children. 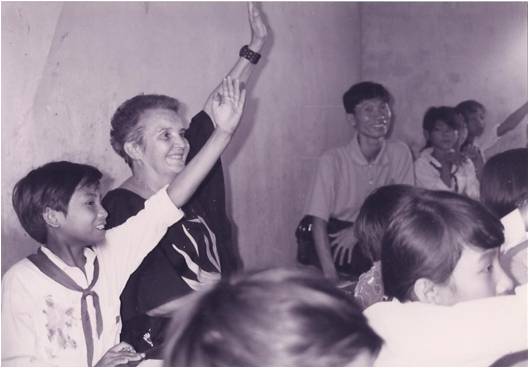 Joining in a class at a school in the Save the Children program, South Vietnam

Q: The subject of your work is particularly difficult, do you have hope for change?

Freda: The work I do is becoming increasingly difficult because child sexual predators are very manipulative and gain access to work and volunteering that provides access to children and, of course, in addition  there are predators within families. The situation is getting worse because of the Internet;  predators can access likeminded others and reinforce their deviance.

It is easy for them to join international paedophile clubs that require several thousand new child pornography images for membership. It is easy for predators to contact new child victims in their own homes using  Facebook and email.

Furthermore, just as people think that road accidents won’t happen to them, parents think that their children are immune from sexual abuse and do little or nothing to protect them.

Another big problem is that child protection systems across the board (the departments, criminal and family courts) are failing to protect young and disabled children. Child abuse is still a taboo in university courses and the professionals working in this field are inadequately trained, and that includes judges.

Can I see much hope for society? Not without a massive change in attitudes, reforms to legal and child protection systems and community and professional education.

Bearing in mind that 70% of mental illness relates to child sexual abuse and the cost to Australian taxpayers is currently up to $30 billion a year (Monash Univ.). Also bear in mind that a quarter of male victims becomes a victimiser and most start in childhood or adolescence. Unless our politicians take this more seriously as a health issue, the damage to children will only get worse. 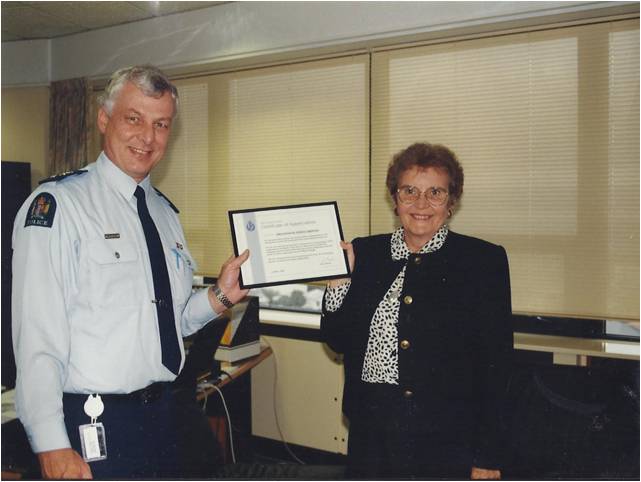 Receiving citation from the Commissioner of Police, New Zealand for a decade of generosity in providing research and consultancy in child protection in1996

Q: Is there a particular story that stands out that you could share with us?

Freda: One significant experience was when a grandma sought my help because she didn’t know what to do. Her 7 year old grand daughter was on holiday from the US and her neighbour invited her to join a picnic with his own two sons and others in the neighbourhood.

As she put the child in the minibus, grandma thanked Mr Clark for being kind and said, “Be a good girl and do what Mr Clark tells you to do”.

Fortunately she didn’t. When she returned she told her grandmother that Mr. Clark had involved them in sexual abuse and she was told to keep it secret. I interviewed the other children who confirmed the allegations and gave the names of others who had been on Mr Clark’s picnics.

In the end, Clark was convicted of offences against 36 local children and was jailed. I was curious why 36 children kept the secret while one little American girl blew the whistle on day one.

She said that her teacher told her class that “no-one is allowed to touch, tickle or play around with the private parts of your body or ask you to touch theirs. If someone tries, you hold out your arms to create a space and say “Stop that it’s not allowed” then tell someone you can trust”.

Freda was the first woman to be named
Senior Australian of the Year in 2000.

Q: What motivates you?

I get angry that children are treated so badly, not just by child abusers but by the very systems that are there supposedly to protect them. I get angry that politicians are not interested in child protection, presumably because children don’t vote. And yet they control the funding for support services.

When did you ever see a poster or an advertisement advising child abusers where they could get help? I get angry because despite one in three girls and probably as many boys have their lives damaged by child sexual abuse, there is community complacency: no-one wants to know.

When surveyed the next day, the non-attenders said they didn’t come because child protection is “too confronting”. 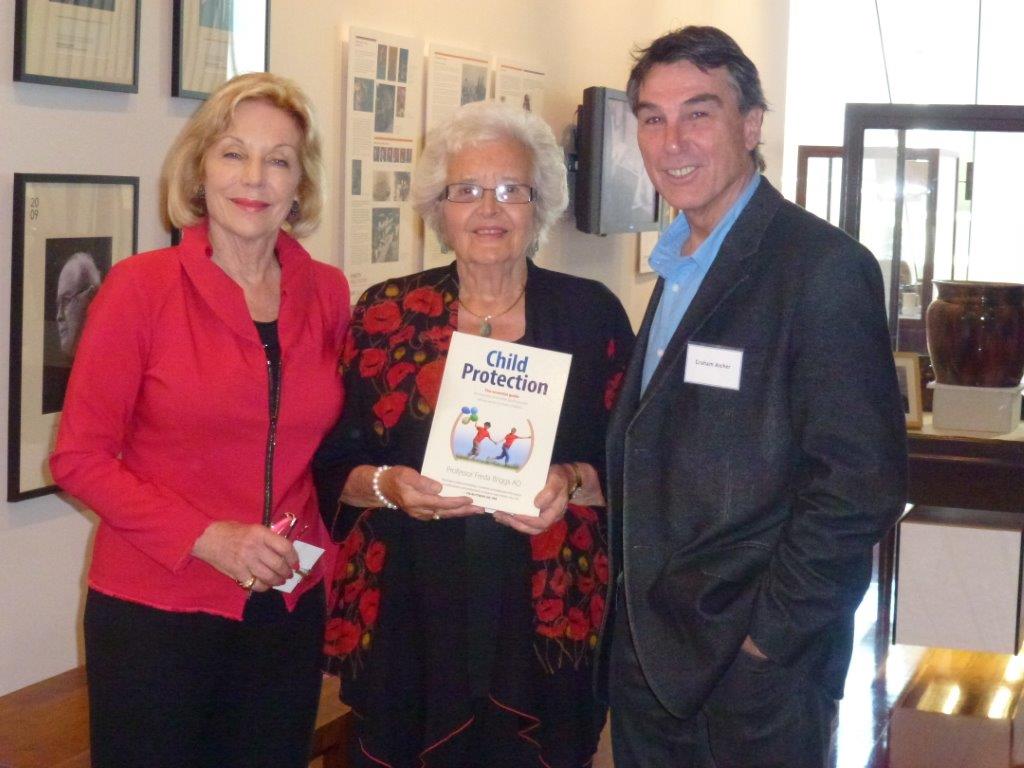 Q: If you had your way, everyone would spend 5 minutes a day…

Freda: If I had my way everyone would spend 5 minutes a day writing to their federal and state MPs demanding reform to the criminal justice, family court and child protection systems that fail to protect young and disabled children from sexual predators.

Freda has worked with a variety of organisations including the Fijian Government, the World Health Organisation, New Zealand Police, the Department of Education in Australia and UNICEF.

Freda has also presented at a number of Parliamentary Inquiries into child protection issues, advised the State and Federal Government on children’s rights and foster care issues, and was co-inquirer into the investigation of former Governor General Peter Hollingworth’s handling of child sexual abuse allegations when he was Archbishop of Brisbane.

She has published 20 books on children’s rights and child protection issues and still regularly contributes to international journals.